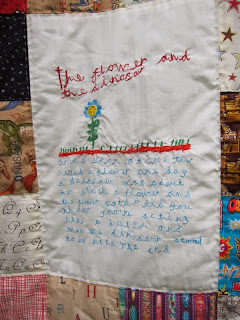 Most of these letters were written when he was 5 or 6. I was originally going to make a quilt only of his stories but couldn't resist including letters such as,
"Dear aunty XXXXX, Please tell me about deadly diseases and ugly spots and horrible lumps. Did you remember going to the place with the deadly plants?*" (*The Poison Garden, Alnwick)

I did write lengthy replies, detailing everything I know about these macabre things.  Possibly my letters were a little too detailed... 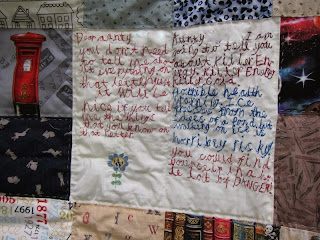 'Dear aunty XXXXX, You don't need to tell me everything on that letter, just it will be nice if you tell me the things that you know on that letter. Aunty XXXXX I am going to tell you about killer energy. Killer energy and killer cold. Horrible health warning. Ice freezes from the edges of a pond but walking on ice is horribly risky. You could find yourself in a hole lot of DANGER.'

...but everyone likes a good fact and I have learned a thing or two from dalek boy:

The material for the backing was from Just Sew, Penrith -I almost didn't buy it because there wasn't enough, but the lovely lady who runs the shop suggested a panel on the back to make the material go further. I then hit on the idea of making the 'label' into a letter to Dalek boy with his address on the envelope. I machine embroidered this free-hand, which is no more difficult than writing with a giant pencil. I love the result and actually think the back would look nice enough as a front.
I should have taken more pictures of the details like the bias binding I made from 'timeless treasure' handwriting fabric or a close-up of the machine free-embroidered portrait of dalek boy (using up vintage cotton from the Maureen stash). However I chose to take photos in a gale storm which wasn't the brightest idea as the quilt just wouldn't stay still.
It sounds a slightly unusual idea, sewing someone's letters into a quilt and giving them back, but I knew dalek boy would understand. It is always a pleasure, re-reading a good letter- even when you wrote it yourself...