This idea has been germinating since I encountered my first brocken spectre (also known as a Glory) a year ago.

Now although I may be guilty of a little superciliousness when it comes to the phenomenon of peak bagging, not so with bagging optical atmospheric phenomena - I would love to see them all. The photos below show my shadow on the clouds, surrounded by a rainbow.

For those of you who are spectre virgins, the "spectre" appears when the sun shines from behind the observer, who is looking down from a ridge or peak into mist or fog. The light projects their shadow through the mist, often in a triangular shape due to perspective. The apparent magnification of size of the shadow is an optical illusion that occurs when the observer judges his or her shadow on relatively nearby clouds to be at the same distance as faraway land objects seen through gaps in the clouds, or when there are no reference points by which to judge its size. The shadow also falls on water droplets of varying distances from the eye, confusing depth perception. The head of the figure is often surrounded by the glowing halo-like rings of a glory, rings of coloured light that appear directly opposite the sun when sunlight is reflected by a cloud of uniformly-sized water droplets. The effect is caused by the refraction of visible light*. 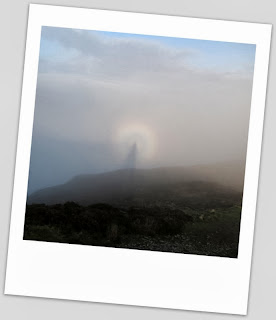 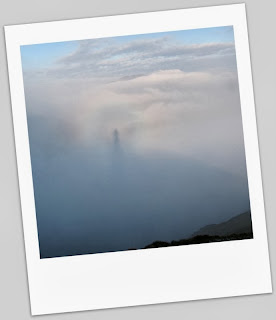 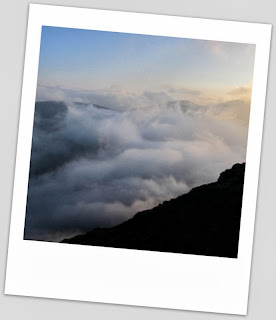 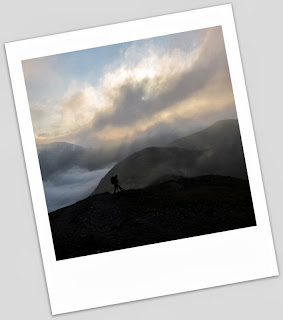 You can see why this made me think about hats.

I wanted to make a lightweight hat but couldn't find the right colours in 4 ply wool, so went for cotton instead. My first attempt, like the little alpaca hat, ended up really really small. This month's learning experience was that cotton has almost no stretch so when knitting with cotton in the round using a fair isle type approach, one should leave very loose floats to avoid puckering and making a very small hat into a very very small hat. This is a well recognised trap that the overenthusiastic novice may fall into if she doesn't read useful tutorials like this by bygumbygolly.

The first brockenspectre hat was in fact so small that it didn't fit my neice's dolly. That was until I cut all the floats and sewed in the ends. I have a sneaking suspicion this is a knitting sin but at least I now have a just about usable hat rather than a really nice dishcloth:
I embarked upon Mark 2 Brocken spectre hat with the gusto and the confidence of knowing the potential pitfalls to avoid. Imagine my surprise when exactly the SAME thing happened with Mark 2. Even worse, because I thought I had factored in the non-stretchability of cotton, I had cast on a spare dozen stitches for good measure, so when I was forced to cut the floats again due to it being too small, the result was a flaccid disappointment. A double wash and tumble dry just about salvaged it, but I suspect I have made another wear-in-the-house hat. 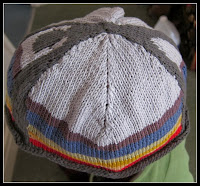 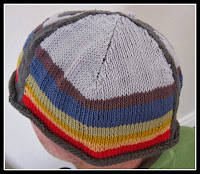 The brocken spectre hat may never become the fashion must have of 2014 but it would look very good with a crepuscular shawl.