I intended only to post about birthday knits today but this Green Wood cup justifies a double-themed posting.

A couple of years ago, Crazy Jake stumbled across some blue wood (in a secret place, deep in the forest) and brought me back a spelk. We learned that the blue/green wood stain is produced by a mushroom called the 'green elfcup' or 'green wood cup'. The mushroom is not often seen, but the green/blue xylindein-stained wood is more prevalent. The pigment in the wood is enduring and has been used in decorative woodworking for hundreds of years: see this post. We have been walking around for years with our 'eyes peeled' for this wood, but we never saw it again...until this week, when Crazy Jake re-stumbled upon it. Having found not only the wood, but a smattering of little elfcups, I was most eager to be taken on a blue wood safari.

The green wood cup has long been on my list of 'things in nature I would really like to see one day' so it was fitting that it shouldn't be too easy and this blue wood safari was not without risk. Look carefully and you will see me in red, in a sea of bracken, tendrils twisting round my ankles, threatening to engulf me.. then there were the slippy rocks and the faery shoelace-untiers; the hidden bogs with fetid bog-stink; the slithery slope and the giant gravity-defying boulders above our heads. When, sweat-slicked and weary, we finally tracked down our prize, there were the FLIES. But it was worth it....
These mushrooms are really small. The flies (and the fact I kept sliding down the slope and the big rock above me was making me nervous) meant we couldn't linger. Lucky for me for the fly conveniently landed in shot - a perfect scale marker to show the tininess of the fungus. Unfortunately we brought back from safari some even tinier nature gifts - 2 days later and Crazy Jake is still finding the world's smallest ticks on him - we stopped counting at 12.

Can't think of a segue from blue wood to birthday knits, but I just had to mention these beautiful gifts knitted for me by mum - a slouch beret and shawlette. The shawlette I especially love - it is knitted in 4 ply 45% silk, 55% superwash merino and I have been wearing it all week, which speaks volumes about the Cumbrian summer. 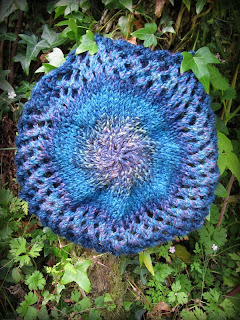 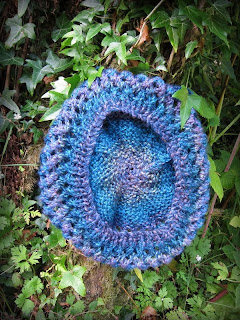 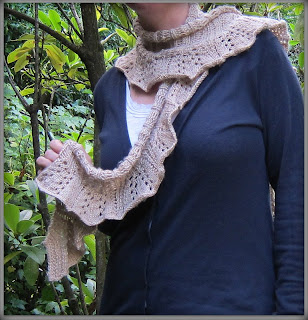 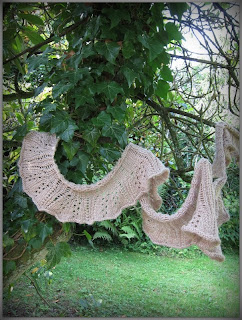