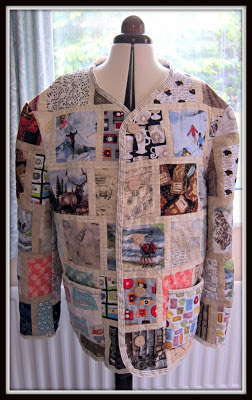 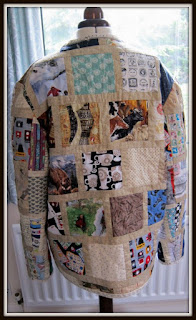 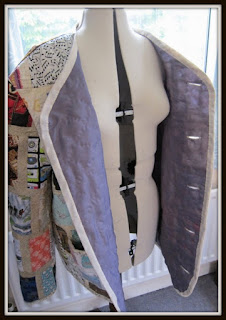 Sometimes a project starts out planning to be one thing, but ends up as quite another thing altogether.

Remember the Wilderness Janker? after washing, it fit Crazy Jake like an Alexei Sayle jacket (buttons popping and sleeves too short) so I got to keep it instead. There can only be one Wilderness jacket so we thought of patches for the next one, and I went 2 sizes up.

It took some time to source appropriately themed fabrics - coffee, cameras, bicycles, skiing, handwriting, backpacking, camping, typewriters, pens, stamps, postmarks, maps, cassette tapes and biscuits. This might be my favourite phase of the project (the collecting/hoarding phase) and I possibly got carried away. Somewhere along the line I also realised I was straying from the original concept of a patch smoking/ lounge jacket but felt I had rather passed the point of no return...

...later when watching the Hobbit, Jake confided wistfully that this was what he meant by patches:

Fortunately we both agreed that the Hobbit movie would popularise the concept of patch smoking jackets so much that all major fashion outlets would soon be selling crappy versions on the theme and then it would no longer be a desirable thing to own a patch smoking jacket.

So with renewed confidence that no-one anywhere was going to have anything like what I was making, I pressed on...
It wouldn't be a Thimble project if everything went swimmingly, so despite by best intentions to cut the lining with room to spare, by the time I had hand-quilted (yes that is right - HAND QUILTED) the shell repeat pattern, there was a deficit at the edges.

Luckily I am master of the work-around because I always make mistakes, so I fashioned a yoke in the lining and sewed plain bias binding to 2 different types of trimming so it was wide enough to cover the lining - even at the sleeve attachments. It looks that good, could almost be worn inside out ... 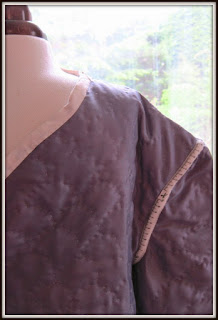 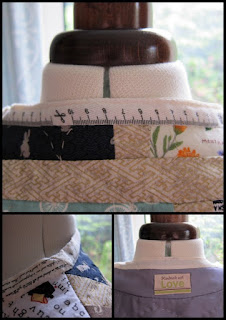 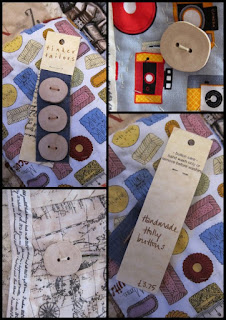 Finally these beautiful buttons from Tinker Tailor buttons via the Woolclip are just perfect to finish it off.