Work christmas parties. Enough said. This year I was determined to fulfil my resolution to make a frock and make a proper job of it. It has been a(nother) curve on the mysterious and sometimes incredibly frustrating but mostly fun journey of learning needlecraft.

This was the starting point: 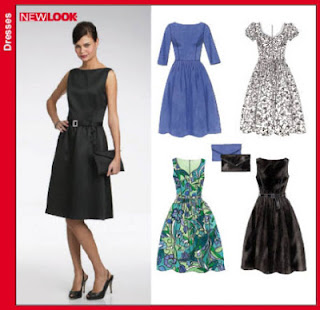 It was a sorry moment when after a recent severe cold spell necessitating extra portions of pie, I had to 'upsize' Hedley in the bust department. Then the really fun bit of ordering fabric which I mostly like to do in a real shop but I ran out of time so used Calico Laine which has the widest selection of dress lining fabrics I have ever come across and is really reasonably priced. I chose the Airforce/Navy iridescent satin back Dupion because it looked a bit special...and also some polka dot green cotton...well just because.

Unlike the lovely lady in black on the packet, my figure crossed over several size bands which was a bit confusing, being a novice. I decided to be extra careful and EVEN made a muslin FIRST:
The idea being that this is made using the pattern, sewn up, tried on and then the muslin pieces adjusted and unpicked to become the new pattern pieces. I am jolly glad I didn't miss out this step because I had to add 2 inches to the length and alter the curve of the side panels. Well to cut a long story short I got into a bit of a pickle sewing the lining to the front mainly because I didn't read the instructions. I also found out that Satin back Dupion frays really easily and is not the best choice for a beginner. There were a few sweaty moments when I had to unpick the zip and it might have ended up in the bin at the attaching the skirt stage, had I not remembered that my best qualities are perseverance in the face of adversity and optimism.

Well, I did it. I had my Pretty in Pink moment (anyone else remember feeling a little crestfallen at the unveiling of the dress in that film after the tremendous build-up? I'd do it again though.

Wow, you look amazing (albeit headless in the photo ;-). What a beautiful dress! I'm impressed!

I know what you mean about crossing sizes, exceot I'm the opposite: small boobs, big hips. I only discovered this recently when I ordered clothes from La Redoute and had a dilemma with sizing decisions. Between us we could have had two perfect figures!

Thanks you are very kind.