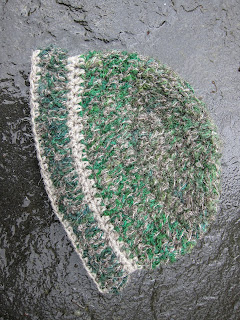 I was planning to talk about every good hat I ever knitted or had knitted or bought hand-knitted or admired, but realised it was a bit ambitious and would involve too many pictures of my head.

So instead I have picked 2 recent lovelies. First is the hand-dyed hand crocheted Herdwick hat I bought at Woolfest this year. I believe it was made at Crookabeck farm. A Herdwick hat?! Yes, that is correct, an itchy scratchy Herdwick hat. The colours are incredible - those hand-dyed greens really do shimmer in the all too brief glimpses of Cumbrian sunshine - always makes me think of the iridescent Green Tiger Beetle for some reason. I have no idea how the spinner managed to make something like this into something so vivid, I have a lot to learn about dyecraft.

Nevertheless, although I tried to be stoical, it really was like wearing a hair shirt...I think...and before long I added a lining. Now it is my all time favourite hat.

Second I will mention this hand spun Gotland wool hat which we bought from Croft Wool and Weavers in Torridon. The couple who spin and dye and weave this wool from their own sheep had a lot of interesting things to tell us about wool and sheep. One fact I recall is that the harder the life for a sheep (the bleaker the winter, the crappier the weather, the sparser the diet), the finer/ softer the wool. I might have got that completely wrong as I only had half an ear on what he was saying - I was too busy fondling all the lovely scarves and shawls to pay full attention.

Anyway this hat caught our attention for its simplicity and the unusual gathered top. We decided it was definitely a man's hat even though we were told it was not committed to any particular sex and could be whatever we wanted it to be. I think that was a sales pitch. Not sure what makes a hat a man's hat but this hat has whatever it takes. 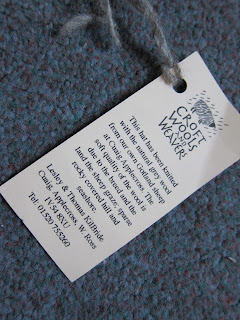