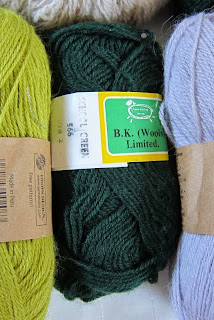 This started out as a germ of an idea when making the Kate Davies: Tortoise and Hare sweater and somehow ended up as this unique piece of self-expression.

In the Maureen stash (inherited from great aunty Maureen), there was rather a lot of this bottle green wool which may well be as old as me. The school green is a bit intense for a full jumper, but it struck me as a great fair-isle filler.

I had one of those lightbulb moments when I suddenly realised that I could substitute the peeries in the hare/tortoise sweater for ECGs...and well, it evolved from there.

Anyone in the know will realise that the jumper has to be read from top to bottom - the first ECG is normal, line 2 reflects the blood clot blocking the artery (when the ST segments go up); the subsequent lines follow the progress over hours-days (as the ST segments fall, T waves become inverted and deep q waves appear). I thought about doing a flat line, but decided not to kill off the patient.

Purlbee has a very useful tutorial on designing your own fair-isle.
It was useful putting the whole thing down on paper before picking up my needles, plus I finally got to use my coloured biros:
The hares and tortoises (tortoi?) of the original design were replaced with hearts (of course), doctor bags, stethoscopes, medicine bottles and syringes. My original design had capsules, but I realised as soon as I did them that they looked more like eyes and once I saw eyes I could only see eyes.... 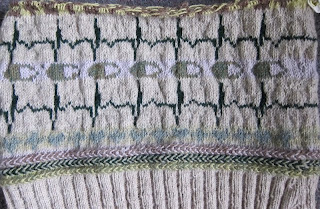 ...so not having the heart (!) to unpick all those lines I removed that segment and using kitchener stitch replaced it with this... 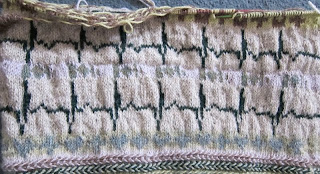 ...which of course you can see is a line of heart murmurs...

...ok it is a little geeky but no more than this doctor who version of Kate's design (which actually has a hidden runic message in it!).